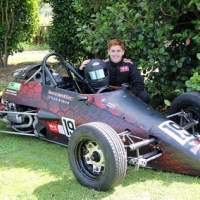 Eastern Bay of Plenty race car driver Reece Hendl-Cox has made the step up to elite level, having been selected alongside seven other drivers for this year's Elite Motorsport Academy programme.

The Elite Motorsport Academy is managed by the MotorSport New Zealand Scholarship Trust and run by tutors from Academy of Sport South Island and the University of Otago’s Physical Education Human Performance Centre.

It was Reece's previous efforts which earned him a spot in the programme. He completed the eight-round Formula First series in January, where he was the top rookie driver and placed fifth overall.

After graduating from kart racing, Reece took to the single seater racing in September last year and his best effort came in round seven where he qualified first and earned second, third and fourth placings.

The year-long Elite programme commences with a camp in Dunedin in July each year where the participants learn a wide array of skills and techniques.

“We will be learning a whole lot of this and it is not just about the driving. The biggest thing I want to improve is the skills needed for sponsorship. That is a pretty big part of motorsport," says Reece.

As well as mental and physical fitness as a motorsport competitor, nutrition and media skills will be part of the teachings in the academy.

The programme also provides a 12-month follow-up package tailored for each driver to ensure they retain and further develop the training regimes and educational opportunities demonstrated during the camp.

Reece said he hoped to use this as a pathway to the Formula Ford series and ultimately Formula One. But he also had designs on racing V8 in New Zealand.