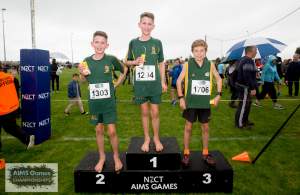 With a massive field of nearly 800 athletes, Katikati College identical twins Daniel and Sean Nicholson led the way, coasting to victory in the Year 7 boys race at Waipuna Park, ahead of Te Kowhai School's Mathijs Wetzels.

All three dipped under the four-year-old race record, with Daniel clocking 9mins 56secs, heading his sibling by 11secs, with Wetzels another 9secs behind. Ironically, Wetzels’ own twin Tobias also finished in the top-30.

The Nicholson twins have already made a big impact in the short time they’ve been running, both dipping under 5mins for the 1500m last year and representing New Zealand in a trans-Tasman meet in January.

Their father Peter – who watched the race with mum Jackie and sisters Casey and Jordan – said the twins had a unique approach to racing.

“They run as one – they don’t really care which one wins, as long as no-one else beats them,” Peter Nicholson said.

Although her aquatic ability is impressive, Bartlett Jnr targeted the cross country this week at the AIMS Games.

“That was such a hard race but I wouldn’t do it if I didn’t absolutely love it,” she said.

One of the smallest of the 275 schools at AIMS this week – Tauranga’s Waldorf School in Welcome Bay – picked up its second gold in as many years with Maia Flint adding the Year 8 crown to the Year 7 title she won last year.

It was much tougher this year for the slim Flint, however, with Rotorua’s Hannah Gapes closing to within 2secs in a storming finish. The pair have regularly dueled over recent years, although Flint’s tactics of starting fast usually pay off.

“I don’t have much of a sprint on me so I try and get out to a good lead and make them chase me,” she said.

Gapes has Wednesday’s multisport to look forward to, having spent plenty of time mountain biking and kayaking on Rotorua’s world-class trails and lakes lately.

Mcmanus was 5secs quicker than the 10min 10sec record, with schoolmate Callum Jeffries and last year’s Year 7 champion Zane Powell also edging under the old record. Both recorded 10:07, with Jeffries awarded second by 0.22secs over the 3km.

“I got passed at the on the big hill and I knew I just had to put my head down and not stop,” Mcmanus said. “It was a great feeling to get to the straight and look around and know I’d won it.”

Sailing also got underway on the first of six action-packed days at AIMS, with most of the 21 codes beginning on Monday.