Doing and being anything they want 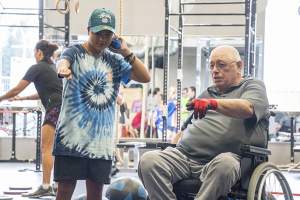 It was enough to melt the heart of a proud young mum – her special wee boy heaving weights around in his own special way at an aspiring athletes meeting in Tauranga.

“He never gets much of an opportunity, so when he does he's ecstatic and so excited.” And it makes mum Piper Kennedy cry, “but in a good way”.

He also lives with cerebral palsy spastic quadriplegia. It sounds mean, it is mean. Spastic quad CP is “the loss of use of the whole body”. It's the most severe of the three types of spastic cerebral palsy.

But there's Seb at the Parafed BOP aspiring athletes youth programme at the Aspire gym in Bethlehem and he's lifting dumbbells. He's also beaming and squealing with delight.

At the Parafed youth programme, Seb and his mates are pushing and pulling the sled, climbing ropes, doing chins up, hammering the ergometer or rowing machine, working the stationary bike, shot putting and taking on sprint relays and box hurdles.

“It's the first of many initiatives for our youth programme for 2018,” says Parafed's Alexia Skipper-Jones. “We want to deliver innovative sports programmes at a grass roots levels so our children grow in confidence not only on the sports field, but in life.”

The aspiring athletes' day was quite liberating for Seb. “Often he finds things are too difficult. People try to be inclusive but it doesn't work because it's just too hard.”

But this time Seb was surrounded by kids just like him, and that was incentive enough. “He had heaps of fun – fun he's never had before,” says Piper.

The young athletes were steered through their drills by personal trainer Aidan Butterworth – director of the MAHI performance organisation which is devoted to creating opportunities for disadvantaged and under-privileged youth.

More athletes would be welcome for the next event, which is still in planning. Message Parafed's Cherryl Thompson via: cherryl@parafedbop.co.nz