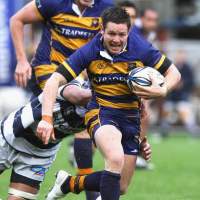 Mike Delany has returned from England to play for the Bay of Plenty Steamers in the upcoming Mitre 10 Cup season.

Delany has recently returned from England, where he was playing for the Newcastle Falcons in the English Aviva Premiership. Delany is a versatile playmaker, providing strength on attack and accuracy with the boot.

In a career spanning more than a decade, Delany has previously played Super Rugby for both the Highlanders and the Chiefs prior to heading overseas to play for Japanese club Panasonic Wild Knights, French Club Clermont Auvergne and the Newcastle Falcons.

Delany is excited to be back on home soil, saying, “It is great to be back, it has only been a couple of days now, but I am loving being back home.”

Bay of Plenty Rugby Union’s Director of Rugby and Steamers Head Coach Clayton McMillan says, “Mike brings a vast amount of experience to the team through his time overseas and having previously played here when he was an integral member of a successful Steamers outfit.

“That success culminated in his selection as an All Black has opened doors for the fantastic opportunities he has experienced since.”

The Steamers first game for the 2017 Mitre 10 Cup season is on August 25 against Hawke's Bay in Rotorua.

Click here to buy tickets to the upcoming games.