Cycling as easy as ABC 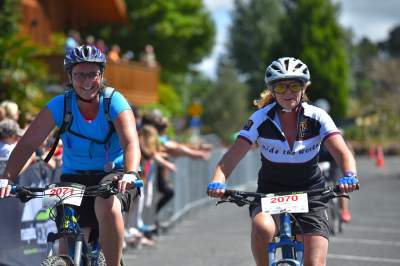 The Senior Trade Waste and Pollution Control Officer at Rotorua Lakes Council significantly increased her kilometres spent on a bike year-on-year, as part of the Aotearoa Bike Challenge.

The Aotearoa Bike Challenge is a fun, free competition that’s all about seeing which workplaces can get the most people to ride a bike for just 10 minutes or more, and is held annually in February as part of Sport Bay of Plenty’s Bike Month.
Debbie first took part in the Challenge in 2017 as part of Rotorua Lakes Council.

“I was getting out there to support the cause and help the organisation get the numbers up, but cycling is not something I normally do – I’m a runner – so I didn’t go out that often.”

But 2018 was different, and when the Aotearoa Bike Challenge rolled around again, Debbie was determined to give it a real go and as a goal to work towards she signed on to do the Ruapehu Express, a 25km mountain bike that starts in the Karioi Forest and ends in Ohakune.

Debbie’s husband, an avid mountain biker, had participated in the event every year since its inception and she was keen to set a challenge and go for it.

“My husband had previously bought me a mountain bike and said, ‘You’re never going to use it,’ so I was happy to prove him wrong!”

“So my workmate Paula and I decided we will go away and do this event. It was a lot of fun and a nice day out. The course was a real mix of forestry, gravel road and a bit of road riding.”

The 25km ride went a long way towards her total kilometre count for both her own personal goal and for Rotorua Lakes Council, as did her 10km training rides leading up to the big day.

Debbie says the biggest barrier in her first year was a lack of confidence – “It was about making the time to go out, and get familiar with the trails and give it a go.”

But after spending more time on two wheels she feels more confident to get out and about, and (following the end of the Aotearoa Bike Challenge) she has kept the cycling going.

Debbie and friends recently signed up to a 12-hour team night ride through The Redwoods called the Moonride, which was held on March 10 -11.

“I was part of a 12-hour team and managed to do three laps of the course. It was great fun and we had a fantastic time.”

Thank you to all those who took part in the Aotearoa Bike Challenge. For a list of prize winners, visit our Play in the Bay Facebook page.