The Cycle Chic Film Tour rolls into Tauranga on Saturday 28 July and is set to showcase a captivating selection of short cycling films to inspire, encourage and celebrate women who love to bike. 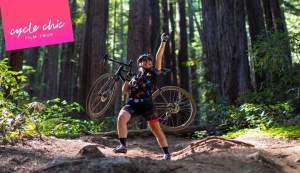 Emerging and established independent film-makers form the collection with eleven carefully selected films that are here to make an impact.

The cinematic adventure includes a magical journey of colour and creativity by an artistic mountain biker in Canada; a New Zealander who believes in the power of bikes, and how a bicycle can be so much more than just a set of wheels; the heart-warming MAMA AGATHA, about a ‘community mother’ who runs a bicycle training program for migrant and refugee women in Amsterdam; an enthralling film from big-city America about two ‘bad-ass BMXers’ (in their own words); and MOKSHA, a moving documentary that highlights three Nepali women who have dedicated themselves to spreading the joy of mountain biking to women across the Himalayas.

Showcasing women who push boundaries, are courageous, and are an advocate for change; all through the power of the humble bike. It's the 'thinking cyclists’ film collection that ALL genders will connect with and enjoy.