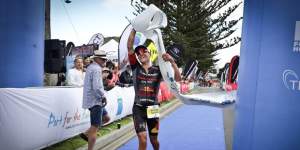 Braden Currie was confident he would defend his Port of Tauranga Half title.

Currie had a strong swim leg and set up the victory on the bike leg where he opened an unassailable lead on Brown and 19-year-old sensation Hayden Wilde in third.

"There was definitely wind out there and it was pretty interesting being solo on the bike that sort of made it a bit more of a battle. But it was surprisingly good actually," Currie said.

"I have been working a lot on my swim in the last year. I knew O'Grady was a good swimmer so I just set myself off him."

Currie was not sure if he could emulate multisport legend Brown's 10 titles.

"Winning eight more years? I don't know about that mate. He is a bit of a legend. You see him out there today just so strong, just so consistent. But who knows.