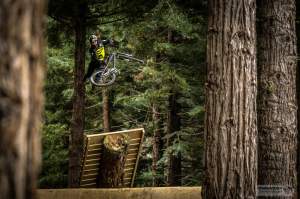 A new breed of freestyle athlete will take on Kelly McGarry’s masterpiece course at Crankworx Rotorua this weekend as New Zealand opens competition season with the first event in the quest for the Triple Crown of Slopestyle.

The epic Brett-versus-Brandon battles of years gone by will take a back seat as five-time Red Bull Joyride Champion Brandon Semenuk (CAN) takes the course on Sunday, April 2 without his friend, and rival, 2016 Joyride Champion Brett Rheeder (CAN).

Rheeder is recovering from knee surgery and his absence leaves the door wide open for new challengers. Leading the charge will be powerhouse trickster Nicholi Rogatkin (USA), who is weighing the possibility of some high-risk new moves.

“Everyone is a contender. Nobody truly knows what all the guys have been training for over the winter, so some surprises could be in store,” says Rogatkin.

“Brandon, of course, had an absolutely incredible run last year, and nobody expects anything less this year… Every rider out there is also a great friend, so I’ll be cheering on all the boys and hoping they stomp the run of their dreams.”

Rogatkin, just 21 years old, opened the 2016 season in Rotorua by breaking new ground in the sport with the first 1080-cashroll ever performed in Crankworx competition. It wasn’t quite clean enough to best Semenuk’s ever-graceful performance, but when he returned to Crankworx Les Gets, where the event was dialed back to a “best trick” competition due to weather, he walked away with the win.

This time around, he will be focused on “planning a thriller of a run all the way down the course,” indicating to organizers he is hungry to podium.

Crankworx Rotorua event director Tak Mutu says Nicholi is one of the most exciting mountain bikers in the world.

“He has a raw talent and is always pushing the boundaries as far as is humanly possible. I have no doubt that when Nicholi drops in to Crankworx Rotorua, he’ll be showing us, yet again, why he is one of the best riders on the planet.”

This will be the last time the Crankworx Rotorua Slopestyle in Memory of McGazza runs as McGarry designed it, leaving the riders with the additional challenge of honouring the great Kiwi rider’s achievements one last time.

“From the moment it hit the competition circuit in 2015, it was known as one of the best in the world. Ordinarily, we like to see each course redesigned every year, but this one was so well done, and Kelly’s contribution so revered within the sport, we knew we had to leave it open for this final season to do his memory justice.”

The Crankworx Rotorua Slopestyle in Memory of McGazza is the finale of the Rotorua festival and runs on April 2, 2017 at 11.30am.

Click here for a full schedule for Crankworx events.