Crankworx Rotorua Slopestyle set to get bigger and better 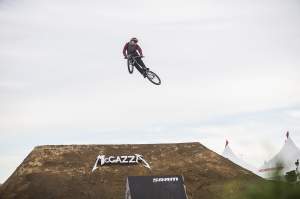 If you were one of the thousands of screaming fans in the crowd at the Crankworx Rotorua Slopestyle you were treated to a visually spectacular and thrilling sight on the weekend.

And the premier event at the Crankworx Rotorua festival on Mt Ngongotaha, is only set to get bigger and better, according to Crankworx Rotorua event manager Ariki Tibble - hard to imagine after Saturday's epic contest.

The competition opened with a fitting aerial tribute to late Kiwi rider and track-builder Kelly McGarry by all the 18 world-class riders and featured a course laden with massive and testing jumps.

Nicholi Rogatkin, from the USA, rotated his way into the history books after he won his first Crankworx Rotorua Slopestyle title. The new vanguard of freestyle brought a next dimension level of competition to bear with a top score of 95.66 - his highest after two rounds.

Tibble estimated a crowd of 8000 people were there to witness Rogatkin's greatness and said it was one of the highlights of this year's festival.