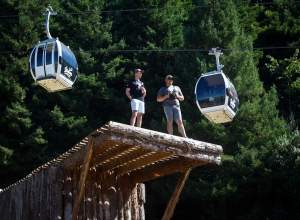 The economic impact of Crankworx on Rotorua was provisionally $4.5 million - with the event racking up its first surplus.

A presentation on the 2017 event took place at a meeting of the Rotorua Lakes Council's Operations and Monitoring Committee yesterday, by councillor Dave Donaldson and Crankworx Rotorua event manager Ariki Tibble.

Mr Tibble spoke about the three primary outcomes; community engagement, putting Rotorua on the mountain biking scene internationally and the economic impact of the event.

He said the two locals' days this year weren't planned, but instead were a response to the weather which wasn't great during the event.

"Running two locals' days were a win for us. Opening up the gates to local residents just gives them a bit more involvement and engagement with the event."

"Families were coming along specifically ... to participate [in Kidsworx]."

He said there were 306 volunteers involved, with 95 per cent of those locals.

Mr Tibble said the event provisionally racked up its first surplus this year.

"I'm proud to sit before you and say that. Any gain will be directed back towards the underwrite and then we'll move forward to 2018."

He said it was provisional because there were still things to be paid off, including some in foreign currencies which would be affected by the exchange rate.

The economic impact of the event at this stage was $4.5m, Mr Tibble said.

"I was anxious about going longer, harder and stronger this year but we've achieved a large portion of what we were going to do."

Mr Donaldson said next year there would be a change in positions, with Mr Tibble moving to event director and Tak Mutu, the current event director, becoming the business director with a focus on growing corporate revenue.

Mr Mutu, who wasn't at the meeting, said that this year Mr Tibble "really took hold of the operations day-to-day".

"It was really difficult with the weather, and with 17 events we had to reschedule half of them. I was able to step to the side and concentrate on what the future looks like."

Councillors were complimentary of the event and offered suggestions for future Crankworx.

A parade and more use of the CBD to help out local shops and the hospitality industry was suggested by councillor Raj Kumar.

Councillor Trevor Maxwell said he thought the event was "fantastic" and it was great it had expanded from five to nine days.

He asked if the "cultural collaboration" Mr Tibble talked about would mean a First Nations delegation would come from Whistler, Canada, the home of Crankworx, which Mr Tibble said was a possibility.

Councillor Tania Tapsell said while she thought it was a great event, she was worried about the cost of tickets for local families, and wondered if the council, with a 49 per cent share in the event, would be able to do something to change that.