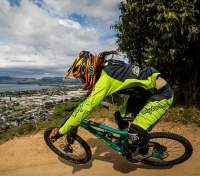 Registration for riders hoping to compete at Crankworx Rotorua is underway.
There are three events during the nine-day festival open for amateur registration, including the....

Crankworx General Manager Darren Kinnaird says Crankworx is always a place to ride alongside the best athletes in the world.

“Athletes from around the world sign up to compete in the same races as the pros, and we are really keen to get the local mountain biking community out at every stop. The riders make the festival,” he says.

The Air DH focuses on jumps and getting air with last year’s winner, George Brannigan, pulling into the finish line in 02:13. Designed to showcase Skyline’s Mr. Black trail, this year it will be part of a tour-wide set of Air Downhill events built on the Fox Air DH at Crankworx Whistler, a speed-focused rip down the iconic A-Line in the Whistler Mountain Bike Park.

Crankworx Rotorua Downhill race director Dave Hamilton says the start features high speed grassy farmland, descending into steep technical native bush, dropping through two man-made rockgardens into the Skyline estate. From there the track boasts the 'Woodyard' where there are two 12 metre gaps and finishes with a wide open, steep off camber section, similar to many World Cup tracks.

“The Crankworx Rotorua Downhill presented by iXS track is designed so any level of gravity rider can tackle it. Although there are the pro lines the quick guys can hit, there are also safety lines so everyone can still have fun without questioning safety. It is certainly the nearest thing to a World Cup we have in New Zealand."

Registration launched last week for the GIANT Toa Enduro, as part of the Enduro World Series, (EWS) and sold out immediately. The GIANT Toa was the first stop in the EWS season two years ago and returns to this spot for 2017, with 30 teams registered to race. It will run the day after the new abridged version, the GIANT Toa Challenger Enduro. The full race offers six to seven stages, 2000 metres of climbing and 64 kilometres of riding.

For those keen to try this next level of racing without taking on the full deal, the GIANT Toa Challenger Enduro offers four stages of Rotorua’s famous flow, 1500 metres of climbing and 45 kilometres of riding, without the pressure of the EWS competitive edge. Come race a challenging course with your best buds, or mates, and get a taste of world-class racing. Registration for the Challenger opens Wednesday, February 15 in Rotorua on enduroworldseries.com.

Registration for all Crankworx events is available on Crankworx.com.

The Crankworx Rotorua Downhill presented by iXS will be broadcast live on Crankworx.com on April 1 from 4-6 p.m. NZDT, which is Friday, March 31 in North America.