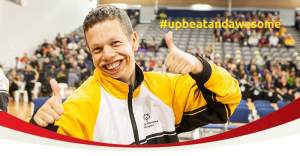 Athletes with intellectual disabilities from around the country are ramping up their training regimes, with less than two months days to go until their pinnacle sporting event in November.

1300 athletes with intellectual disabilities from 42 Special Olympics Clubs and three schools are set to take part in the Special Olympics New Zealand National Summer Games which will be held in Wellington from 27 November to 1 December 2017.

“With the 100-day countdown now on, our athletes, team management, volunteers and our event management team are getting really excited about the Games, and are putting the final touches on their preparations,” said Special Olympics New Zealand Chief Executive Kathy Gibson.

“Our athletes will travel from as far as the Bay of Islands in the north, and Southland in the south, and will be supported by a team of nearly 500 volunteer coaches and team management. On the ground here in Wellington we are recruiting more than 1000 volunteers to act as marshalls, score keepers, baggage handlers, tour guides and many other roles.

“All up, around 3000 people will be involved in the event, cheered on by many more family, friends and supporters.”

Ms Gibson said that we well as the sporting competition side of the event, Special Olympics New Zealand will also run a Healthy Athletes Programme during the Games delivered by more 70 volunteer clinicians. Athletes will be offered the opportunity to take part in screenings focused on hearing, eye sight, dental care, and podiatry.

“We know that people with intellectual disabilities typically have poorer health outcomes, and may have underlying health issues that go undiagnosed. The Healthy Athletes screenings can help to identify these issues, and allow our athletes to get the right treatment.”