Coaxing a city into the saddle 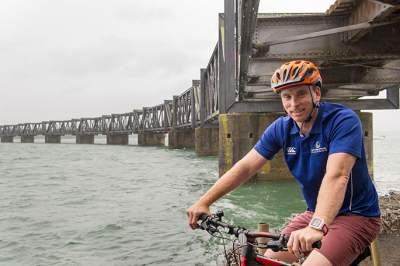 With a little more confidence and “savvy-ness” Tauranga, the country's most car-dependent city could easily become part of the global, bicycle-friendly family that includes Copenhagen, Amsterdam, Strasbourg and Malmo in Sweden.

Local statistics suggest 60 per cent of us would cycle more but we're worried about the dangers – about competing for road space with cars.

“Those are the people I am trying to uncover,” says Sport Bay of Plenty's cycling guru, Paul Roozendaal.

“I know there are plenty of people out there who want to ride a bike,” he says. “We just have to reach them and get them to take the next step.”

Community cycling coordinator Paul came for a chat with The Weekend Sun on his mountain bike. This was after going for a one-hour ride before work where he preaches the gospel of cycling.

“Cycling's for everyone, and can be enjoyed by everyone. That's why they say it's just like riding a bike - we have all done it and it will come back to you. It's definitely a lifestyle. It's nice to get out on a bike.”

February has been designated Bike Month by Sport Bay of Plenty's Play in the Bay initiative to get more bums on bikes - and there is work to be done. According to Tauranga City Council statistics, only six or seven per cent of tried and true cyclists are confident of holding their lanes and the road. Another 60 per cent of us like the idea of cycling but have conceded ownership of the roads to cars – we don't have the stomach for it.

“That is one of the challenges of Bike Month,” says Paul, “showing people they can do things and do them safely. I just need to know where those potential cyclists are hiding because there are always people who want to reconnect with cycling.”

And reconnecting probably only requires attending one of the many Be Cycle Savvy workshops held at Sport Bay of Plenty this month. They focus on learning about safer off-road routes (of which there are many), learning about being smarter rather than braver, how to hold the road and own it for roundabouts and intersections and how to negotiate them smartly and safely.

Yes, says Paul, people are probably daunted by the thought of cycling to work and the prospect of tackling peak time traffic on Cameron or Hewlett's Roads.

“On the other hand, riding to work on a busy road at peak time can mean you are the fastest thing around,” he says.

“I used to live at the Mount and cycle down Totara Street to work in Tauranga. Cars would be at a standstill and I would just cycle by. It's not too daunting when the cars aren't moving.”

Bicycles mean healthy living and good fun and Paul has his own anecdotal evidence.

“Some people were asking a guy whether he had ridden his bike to work, and he got all paranoid about sweating and smelling even though he'd had a shower. But they could see it in the way he looked, his positive attitude and the tone of his voice. Exercise had made him different.”

And there have been some great feedback, initiatives and programmes implemented since establishing the community cycling co-ordinator role three years ago through funding from Travel Safe, Tauranga City Council and Cycling NZ.

"Cycling is improoving, getting bigger. And I was certainly unaware of the number of recreational cycling groups out there in Tauranga,” adds Paul.

For example, about 70 cyclists go out for a three-hour ride each Wednesday morning. “That's one group, and there are others. And we are starting yet another at the Lakes on a Monday.”

What Paul would like to achieve in his tenure as Sport bay of Plenty's cycling coordinator is to see more people connected with cycles and cycling. “I would like people who haven't ridden a bike for years to get one, get some skills, get riding with groups, get confidence on the road and just get out on a bike.”

Some of his favourite tracks are around Kulim and Ferguson Parks. “A lot of cyclists use those areas – they're ideal.”

He says Bike Month this February is definitely going to be fun. And what Paul will enjoy most is meeting new and rediscovered cyclists and listening to stories of their cycling experiences.

“Seeing them learning something and enjoying will be very satisfying for me,” he says.

For more information on Bike Month and a full schedule of activities visit: www.sportbop.co.nz/bike-month or pick up a brochure from the Sport Bay of Plenty office on Devonport Road, Tauranga Library, Mount Hot Pools or Papamoa Community Centre.