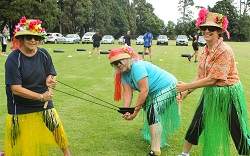 It's all go in Tauranga as the Cooney Lees Morgan City Explorer Challenge enters it's final third.

Last Wednesday a number of teams converged at the Tauranga Domain for the Play in the Park lunchtime challenge.  there were smiles and laughs all around as teams competed in games such as Toss the Pot, Splash n Dash, Golf Link and Human Noughts and Crosses. Thanks to MORE FM and the Sport Bay of Plenty Youth Engagement team for all their help.  Check out the video below for action from the day.

Congratulations to the Fruition Tutti Fruitis who won the photo contest with the the caption "Play nice or the teddy gets it!".  For thier effort they receive a prize from Cooney Lees Morgan.

Well done to Staples Rodway and Westpac Cmmercial who each had three teams entered in the City Explorer Challenge and shared the prize for most teams entered - a morning tea kindly supplied by Robert Harris Tauranga.

The team photo competition is well underway - vist the Play in the Bayfacebook page and vote for your favourite team photo - whoever has the most likes by 8am Friday win another morning tea from Robert Harris.

Enjoy the trails this week!