The workshop – Minimising Injury to Maximise Potential – featured expert advice from guest speaker Jacinta Horan of Bureta Physiotherapy and focussed on injury prevention and tips for how to best manage injuries when they occur.

Jackson, a three time equestrian Paralympian gold medal winner and world champion, has faced numerous health challenges including nerve damage to her neck after an accident in 2007, and Chronic Regional Pain Syndrome which led to relentless pain, a cocktail of medications and weight gain. 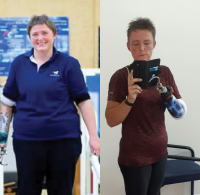 In January Jackson told the Rotorua Daily Post that at the time she felt like she was only existing, not living. "I've always struggled with my weight, and have been a typical yo-yo dieter for over two decades," she said.

In the last twelve months she has managed to shed 30 kilos and has taken up running. Jackson initially signed up for the Minimising Injury to Maximise Potential workshop as a way to become more social after years of tackling chronic pain. After the workshop she completed her first five kilometre Parkrun in under 35 minutes.

Jackson said the workshop gave her another boost to keep the ball rolling on her health and wellbeing journey.

“I don’t think I’ve felt as alive or pumped since I was training for the Atlanta Paralympics in '96 – only difference being I’m not chasing medals this time, I’m doing it for me.”