Celebrating the old and young in 50 years of squash 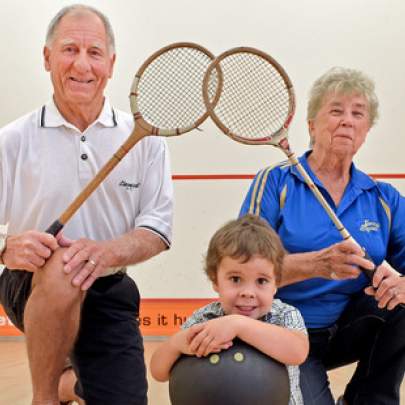 When Harvey Bryant spotted a squash racquet outside the Tauranga police station in 1973 and handed it in, he had no idea he would go on to become a squash world record holder, president of the Tauranga Squash Rackets Club or even part of the club's 50th Jubilee celebrations.

Mr Harvey arrived in Tauranga in 1967 when he spotted the racquet lying on the ground and handed it in. No one came forward to claim it, so the police gave it back to him, and Mr Bryant's love affair with the sport and club began.

"I got very involved," he said. "One night, we tried to break the world record for endurance."

Mr Bryant and five others began what they thought would be 36 hours of non-stop play.

"While we were doing that, we were notified from somewhere in the world it had just gone up to 43 hours. So we had to go for another night."

Three people dropped out of the attempt, but Mr Bryant kept going, something he still considers a major highlight over the past 50 years.

Mr Bryant, who was president in 1973, said he was looking forward to the club's 50th Jubilee celebrations in July.

It would be an occasion to celebrate the past and current members, many of whom helped shape the organisation to become the largest squash club, membership-wise, in New Zealand.

The club's oldest current member, Yvonne Downs, said she couldn't believe she had been a member for 42 years already. And at 83 years old, the sprightly life member said she was not planning on slowing down any time soon.

"I've been here since 1975, and I haven't stopped. If you stop going, you will die. You become a couch potato. I'm not going to be that," she said.

The club's youngest member, Aiden Hurley, 4, was yet to fine tune any future competitive skills but can already wallop a ball with plenty of punch.

Parents Steve and Jodie Hurley have been members for 14 to 15 years and said Aiden has practically grown up at the club.

"Everybody knows him and helps keep an eye on him," Ms Hurley said.

"It's interesting because people won't expect Aiden to necessarily connect (with the ball), but, when he does, it bounces back quickly. People get quite surprised."

Jubilee co-ordinator Donna Taituma said the 50th celebrations on July 22 had been timed to coincide with the World Junior Squash Championships, held in Tauranga.

Ms Taituma said it was a perfect occasion to share with other squash enthusiasts the high calibre of skill that would be on display during the champs.

She credited the club's move into the purpose-built squash and fitness centre next to Sport Bay of Plenty on Devonport Rd in 2011 as helping boost its profile and facilities.

"We have a real passionate members and governance group that the foresight and vision to make sure our members have every opportunity available to them," she said. "That's what makes it successful, it's the people behind the scene."

Registrations for the jubilee were now open and people were invited to take part in the club's celebrations by visiting the club website .

- In 2016 the club had seven teams win Regional Club Champs that proceeded to attend National Club Champs.
- Three of those teams won national titles.
- Dame Susan Devoy is the president and patron of the club.
- Membership is at more than 600 financial members.