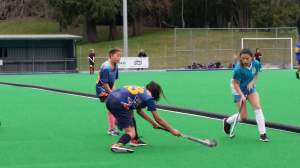 5 codes were on offer including Miniball, Football, Rugby, Netball and Hockey.

This is a huge event involving a number of people on the ground on the day to make it happen.

On behalf of Sport Bay of Plenty and the CBOP Schools who took part a huge thank you goes out to Helen from Rugby, Marilyn from Hockey, Ngaire from Basketball, Pat and her team from Netball and Barry and Juan from Football.

Appreciation and thanks also goes out to the local high schools who provided student referees: RGHS, RBHS, WHHS, JPC and Rotorua Intermediate.

A great day enjoyed by all.