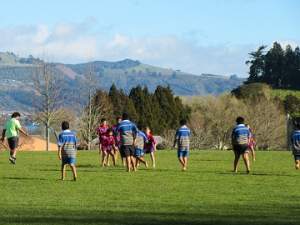 Ten Year 5/6 Rotorua School teams took to the field today out at Puketawhero Park where they played off to see who would take out the 2016 CBOP Rugby League 9’s Tournament.

Defending champs Western Heights Primary School 1 went into the finals against Te Kura O Ngati Rongomai with one loss under their belt from pool play games but managed to win the match 24-16. 3rd place went to Owhata 1 who played off against Rotokawa.

Congratulations to all the players who took part and a big thank you to NZRL who coordinated the event on the day and supplied the referees also a thank you to our first aider Doug Allan.