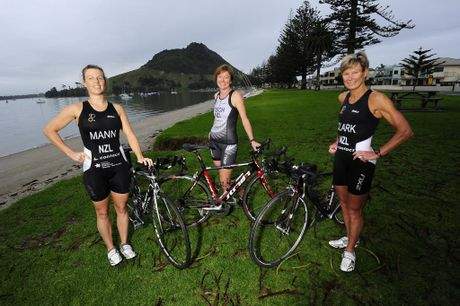 Seven local athletes and one coach are among the New Zealand contingent heading to the International Triathlon Union's Long Distance Triathlon World Championship race to be held in Belfort, France on June 1.

Jo Tisch, Debbie Clark and Terri Mann will be joined in the national team by newcomers Brent McKay, John Vickers, Bronwyn Copeland and Andrew Dixon, with local coach Carolynn Margan being brought on board by Triathlon New Zealand to provide coaching support.

The team consists of 58 athletes ranging from 25 to 76 years of age - with four of the 18 women coming from Tauranga.

The disproportionate representation comes as no surprise to Triathlon Tauranga president Adam Hazlett. "It just confirms the quality and depth of triathletes in this area.

"With our local environment, a strong and supportive triathlon club and the range of excellent local events on offer, we are very well placed to succeed in the sport."

Squad members earned their places in the team over the summer triathlon season featuring the Port of Tauranga Half - which doubled as the New Zealand Long Distance Championship race - and the Taupo Half Ironman.

Clark and Tisch won gold in their age groups in Tauranga, while Copeland finished second in the 35 to 39-year-old age group.

Mann booked her ticket by finishing third in the Taupo event and then winning the Eves Realty Triathlon series.

Dixon also qualified in the Taupo Half Ironman and went on to complete the full Taupo Ironman in March.

McKay and Vickers did enough in the Tauranga event to earn their spots.

The weather in Belfort, in northeast rural France near the German and Swiss borders, has been patchy at best, meaning an ability to deal with the elements may prove crucial for our athletes who have grown accustomed to fine weather during a prolonged summer.

The course is a tough one consisting of a 4km lake swim, a 120km cycle - including a 13km climb to approximately 700m that has featured on the Tour de France - and a 30km undulating run.