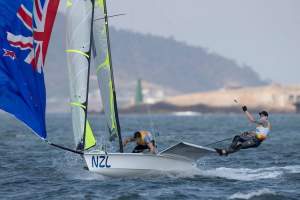 Hosted by Sport Bay of Plenty, the 2016 Bay of Plenty Sports Awards were a superb gala evening held at ASB Arena, in Mount Maunganui. The awards bring the region together to recognise and celebrate outstanding achievement by Bay of Plenty athletes, coaches and officials over the previous twelve months.

Peter has had an exceptional year including winning a gold medal in the 49er class at the Rio Olympic Games, being awarded World Sailor of the Year, going unbeaten in the major 49er regattas and being Helmsman for Emirates Team NZ at the America’s Cup World Series.

As always the competition was exceptionally tight and the judges found it difficult to separate the fantastic achievements. Sport Bay of Plenty Sport Manager and judging convenor, Megan Cleverley says, “The calibre of nominations never fails to amaze me, and it is fantastic what Bay of Plenty athletes, coaches, officials and administrators are achieving. This year has highlighted the number of athletes performing on the international stage, and in particular the wide variety of sports and schools doing well.”

International hockey umpire Kelly Hudson was awarded the Bay of Plenty Times Official of the Year award after officiating an Olympic Games quarter final and the final of the FIH World Champions Trophy. The Farmer AutoVillage International Sportsperson of the Year was presented to Mahe Drysdale, who won an Olympic gold medal, his third medal in three Olympic Games. The Radio Sport Club of the Year was awarded to the Mount Maunganui Lifeguard Service who were awarded Club of the Year at the BOP Coromandel Surf Lifesaving Awards of Excellence and were Eastern Region Champions and National Champions for both the Surf Life Saving NZ Beach Events and Pool Championships.

“As illustrated at the recent Olympic Games, the Bay of Plenty has a depth of sporting talent and the sports awards are a wonderful opportunity to recognise this annually. It is a privilege to be able to honour our top athletes, officials and coaches again in 2016. We look forward to following their continuing achievements in the future, while also celebrating their contributions to date. We are proud to continue to host the Bay of Plenty Sports Awards, which have been celebrating sporting excellence since 1969,” says Sport Bay of Plenty CEO Heidi Lichtwark.

The Dudfield Bryce Printers Service to Sport category acknowledged people who have been involved in their chosen sport for at least 10 years and have made a significant contribution at either regional or national level. The recipients came from a wide variety of sports including badminton, bowls, rugby, football, hockey, netball, tennis, sailing and disability sport. The opportunity to recognise these stalwarts of the sporting sector is a highlight of the evening as they are unaware until the award is presented on the night.

The gala evening which combines both the secondary school sports awards, along with the open categories is a great celebration of the sporting prowess across all schools and codes. The six secondary school categories provide inspiration to the region’s up and coming athletes. Congratulations to Whakatane High School Rower Lenny Jenkins for winning the Toi Ohomai Institute of Technology Secondary School Sportsman of the Year Award and Mount Maunganui College surfer Elin Tawharu for being named Toi Ohomai Institute of Technology Secondary School Sportswoman of the Year.

During the evening three new Bay of Plenty Olympians were presented their Olympic Pins as recognition of attending the Rio de Janeiro 2016 Olympic Games. The gold pins were presented by Korne de Pape on behalf of the New Zealand Olympic Committee and are engraved with their unique NZ Olympian number:
Ruby Tui – 1356
Scott Curry – 1263
Kane Radford – 1338

Over 500 guests hosted by Sport Bay of Plenty and MC Michelle Pickles attended the awards and joined in congratulating the finalists and winners. In what can only be described as an inspirational night recognising the Bay of Plenty’s best talent, congratulations must go to Peter Burling for his achievements and the strong list of award recipients.

The winners of the 2016 Bay of Plenty Sports Awards will join an illustrious group of past winners and become part of the Bay’s sporting history.