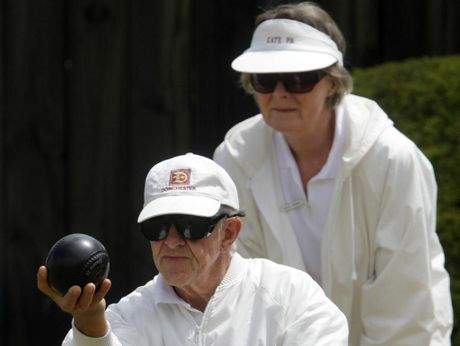 The Blind Jacks fly out tomorrow to the World Championships to be held in Worthing, England from July 6-18 led by Tauranga resident David Monk.

The fifteen-strong Blind Jacks team is captained by their most experienced bowler Monk, who turns 70 next month. He won a silver medal in the singles at Melbourne in 2009, which was the team's only medal, and he is quietly confident that he can go one better in England.

"I am looking forward to it. I have been to three other world championships and it is quite an honour to be captain," Monk said.

"It puts a wee bit of pressure on you. Blind bowls might not be world renowned but you are the best in your field."

Monk first started playing blind lawn bowls in 1990 but had been a sighted bowler at Gate Pa prior to that until he lost his eyesight through glaucoma.

He believes this Blind Jacks team is the best prepared of any he has been part of.

"We have put a lot more emphasis on practicing as a team. We have had three two-day training camps at the Pakuranga Bowling Club on a green specifically prepared to be similar to the heavy greens conditions that are likely to be faced in England.

"There has been a lot of emphasis on fitness too."

There are four divisions at the world champs ranging from B1, the one Monk is competing in for bowlers completely blind, to B4, for bowlers who can see partially up a green but are likely to have conditions like tunnel vision.

Monk's wife Kathleen is travelling with him as his director, to act as his eyes. Directors give the players their bowl on the right bias, positions them on the mat, lines them up facing the specific direction they need to bowl to, provide verbal information about the result of each of their own and their opposition's bowls, and offer suggestions around strategies.

"It is terribly important and you have to have a good relationship. She fine tunes where I am going to play the bowl, gives me the distance and tells me where the bowl finishes.

"For that we use the clock system, where a bowl that finishes at a metre at 12 o'clock, is a metre directly behind the jack. That helps build up the picture." Monk is hopeful his team can come back with a record medal haul.

"We are quietly confident we can pick up three or four medals with a bit of luck. Bowls is a sport that anyone can beat anyone on any given day. We have three bowlers who have not competed internationally but the rest are reasonably experienced.

"It is going to be a learning curve but we are hopeful of picking up some medals."