BOP make up most of NZ Canoe Slalom Team 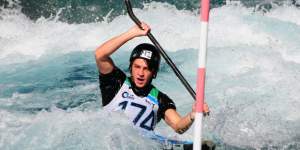 Bay of Plenty athletes are the dominant force in the New Zealand team named yesterday for the ICF World Cup series in Europe.

The Bay's supremacy at a national level is across the experience spectrum from Olympians Luuka Jones and Mike Dawson to up-and-coming talents like Claudia Paterson, Josh Bell and Callum Aitken.

Jones has been selected in C1 ranks for the first time, as well as K1 where she won silver at last year's Olympics.

Callum Gilbert, 21, has double reason to celebrate with his national selection coming after being given High Performance Sport New Zealand support for the next two years. He is now a carded athlete alongside fellow Tauranga paddlers Jones and Dawson.

Gilbert had an impressive international season in 2017, making the semifinals in all five world cup races - a feat not even Dawson has managed.