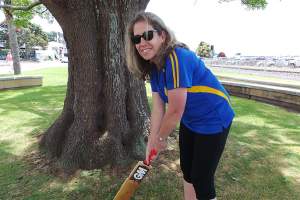 Bay of Plenty Blind Cricket representatives will be playing their first home game this season at Blake Park this Sunday.

The first T20 game against Manukau South begins at 10am, followed by a match against Waikato after lunch.

Team captain and Bay of Plenty Blind Sports Club president Steph Jobson says the sport is growing and is a great way for visually-impaired people to stay active.

Blind cricket is played with a special plastic ball filled with ball bearings and metal wickets, to make it easier to hear. They also bowl under arm.