Biking faster than driving for commuters in Tauranga 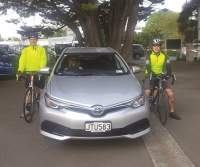 Riding your bike to work in Tauranga can now be faster than taking your car.
That’s the conclusion of a car vs bike challenge at Tauranga Hospital aimed at encouraging more people to cycle.

In five locations across the city - Mt Maunganui, Brookfield, Pyes Pa, Welcome Bay and Hairini – the journey times to the hospital were recorded. Multiple trips were made along each route across several months and yielded average times for both modes of transport.

For Welcome Bay the average journey time was over 11 minutes quicker by bike. A two-minute video of this leg of the challenge, featuring a spoof Top Gear ‘Stig’ vs cyclist contest, can be viewed at: www.bopdhb.govt.nz/media-publications/2017-media-releases/january-2017/biking-faster-than-cycling-for-commuters-in-tauranga/

The experiment was the brainchild of Bay of Plenty District Health Board (BOPDHB) Reporting Analyst Tom Larkin and comes in the lead up to February’s month-long Aotearoa Bike Challenge. He said he wanted to encourage people to commute by bike.

“Adults should get 30 minutes of exercise a day. If you cycle 15 minutes to work and back that’s your 30 minutes, no need to join a gym and it doesn’t take extra time out of your day. These results show it can actually save you time.”

Tom began timing his own bike and car journeys after noticing increasing traffic volumes. He graduated from this to encouraging others to cycle to work.

“If it encourages one additional person to cycle to work then I’ll be happy, if it encourages 20, 30, 40 plus then absolutely fantastic,” said Tom, who lives in Mt Maunganui.

In three out of five timed journeys in the challenge, cycling proved quicker than jumping in the car, and for the other two driving was only a couple of minutes faster.

With Tauranga’s population booming, congestion was likely to get worse said Medical Officer of Health Dr Phil Shoemack. He added that cycling had many advantages over driving.

“You’re going to get some incredible health benefits, being physically fitter and more relaxed,” he said. “It’s great fun, you’re free to choose when and where you travel, parking is rarely a problem, and it’s very social - you’ll find yourself acknowledging and being acknowledged by other cyclists. You are also doing your bit to tackle climate change by significantly reducing your carbon footprint and, as a bonus, you’re reducing congestion one car at a time.