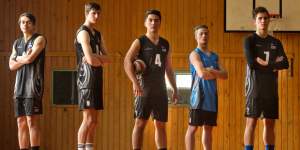 They may have relinquished their national secondary school crown but, by any standards, it's still been a great year for volleyball at Western Heights High School.

Five players from the school have played age group volleyball for New Zealand and the pairing of Daniel Michael and Tyran Gillespie won the national secondary school beach volleyball title.

One of the school's top prospects, Billy Johnstone, captained the New Zealand under 18 side that also featured Western Heights student Kuratea Broughton in a US High Performance tournament in Fort Lauderdale, Florida.

Daniel Michael, Jon Newman and Matthew Butterfield were part of the national under 20 squad that competed in the South East Asian Games.

After representing New Zealand at under 17 level last year, Johnstone was a first time captain in the US.

He said both he and the rest of the team gained confidence from playing in the tough US tournament.

''It was good to see how we matched up against players from a country where volleyball is one of their greatest sports. I think we all learned a lot overall and I think we came back as a better team,'' he said.

As well as top age group state teams, there were national teams from Canada, the US and Australia.