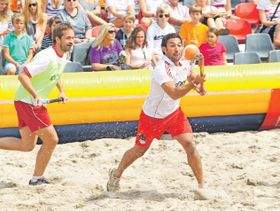 Beach hockey is a spectacular fast-paced sport that makes its New Zealand debut at Mount Maunganui's main beach on Saturday and Sunday.

One of the fastest-growing sports in Germany, the Netherlands, Belgium and Spain will make its first appearance on New Zealand sand when the spectacular NZ Beach Hockey Champs take place at Mount Maunganui's main beach on Saturday and Sunday.

The sport is marketed with the clever catch cry of "no shinpads, shoes or worries ... just sun, sand and fun. Hockey has arrived at the beach" and promises to deliver some non-stop action from 12-6pm this weekend.

Eight teams featuring 60 players from all over the upper North Island are taking part and spectators are able to try the game out for themselves. Between 3-4pm on both days a celebrity game of three-on-three between the public and members of the Black Sticks Olympic hockey teams, including Tauranga's Sam Charlton, will entertain the crowd.

Simply roll up to the official site beside the Mount Surf Club to enter on the day.

Jason Niles from NZ Beach Hockey is rightly proud to be first to bring this exciting sport to New Zealand.

"It's the first time this has been organised in New Zealand after being in successful operation in Europe for the past eight years," Niles said. "After experiencing beach hockey in Germany, where over the course of the event 20,000 people watched, I thought that the concept would be perfect for the hockey scene in New Zealand.

"The Mount is the ideal location with its flat and golden sand coupled with being an extremely popular beach for people from the upper North Island.

"We have a big and bright inflatable field which the games are played inside which will be attractive to both the competitors and spectators alike."

"The biggest difference is, because it is played on sand, it is very difficult to do stuff along the ground, so spectators will notice that a lot of the action is in the air and you can actually play the ball above your head.

"So it is totally different in that respect and more dangerous but the ball is a mini football, the same size as a hand ball, which is light and can go through the sand easily."