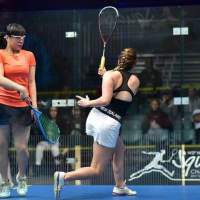 There's nothing like a win to settle those world championship nerves - just ask Camden Te Kani-McQueen.

The Rotorua 18-year-old was the first of two Bay players to take to the court at the World Junior Squash Championships in Tauranga on Wednesday.

In the first match of the tournament to be played in the Queen Elizabeth Youth Centre's specially built glass-walled court, Kiwi Gabe Yam set the tone with a 3-0 win over Australia's Jacob Ford: 11-1, 11-5, 11-8.

Next up was another transtasman matchup.

The taller Aussie led through the first half of the first game, but Te Kani-McQueen found her rhythm and came from behind to win the first game 11-9.

She dominated in the next game, keeping the Aussie at 2 points as she scored 10 in a row to take the game 11-2.

The third match was a harder fight. The Kiwi led to start but her opponent crept back, drawing 6-6, then taking it to 8-6. Te Kani-McQueen finished strongly to win the game 11-8 and the match 3-0.

Throughout she was cheered on by her mum and dad, grandparents and other family and friends who had come from Rotorua to watch their girl compete against the world's best.

"It settled the nerves a bit.

"Mentally it was about trying not to worry when I was getting pushed around a bit."

It was the first competition game she had played in a glass court, and she was glad to have trained in a similar court in Auckland last week.

She said she was feeling fitter than she had ever been after months of training with her dad, Danny McQueen.

Mr McQueen said he was proud of how hard his daughter had worked, training two hours a day on the court for the past year and adding gym time and running over the past few months.

"She played nicely. Her style is really attacking - she puts her opponents under pressure. When she gets in a rhythm she can really take them out."

She lost 3 games to 1 against South Africa's Faith Panashe Sithole.

Earlier in the day, she said her experience at the junior worlds in Holland in 2015 was helping her deal with her nerves before her first game.

She said it was awesome to have the tournament so close to her home town this time, so her family could drive over and see her play.

Dame Susan Devoy was back in her hometown yesterday for the first day of competition in the World Junior Squash Championships.

The four-time squash world open champion said the Kiwis were up against stiff competition from "the very best in the world".

"I am sure they will rise to the occasion with the home crowd support."

She was looking forward to a little family reunion at the tournament, with her nephew Scott Devoy in Tauranga to coach the American team and other rellies due to compete later in the week.