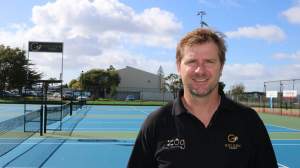 New Zealand's first unisex, one-set tennis competition is being held in the Bay of Plenty and starts next month.

The Golden Homes Sunday Shootout, to be held at the Mount Maunganui Tennis Club once a month from October to January, is the creation of ex-touring professional Jason Helms, who grew up in Rotorua.

Each monthly tournament will see 16 singles players compete over three hours, with men and women playing against each other in one-set matches. Helms hoped it would do for tennis what T20 has done for cricket.

"We need our children to watch some incredible tennis, to get inspired. The idea is to get young kids watching some top tennis players.

"Parents will love this tournament because it is over quickly, so works in with children's attention spans.

"For the players there is no waiting around, no delays - it is fast tennis, sudden deuce games, one set. Every shot counts, the pressure is intense. You need to bring your A-game to the table."

Each Sunday Shootout would be an invitational match which called for interest from players, then a week before the tournament a draw would be announced. There would be $1000 prizemoney up for grabs at each tournament.

"We'll have some of our younger juniors playing in the tournament as well - they'll play against some top players they might not have the chance to play otherwise. For mum and dad it costs them $15 and they get a wicked training session.

"I have young kids myself and to go and watch a tennis tournament can take a whole day and the kids get bored. This is three hours of super intense tennis and then it's finished."

He said four Rotorua players had signed up already and he was eager to see more.

"A lot of the best junior players in New Zealand and players at that next level, that age where there's nothing for them 17-22, they live in Rotorua. They win the premiership all the time.

"I really want the guys who are 14, 15, 16 to get a sniff of what top tennis is like. It's really for them to see that next level they have to be at, to show them what it takes to get there."