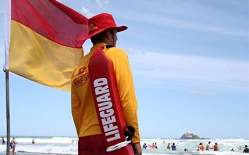 It's the first time the 19-year-old has taken part in the annual event, but he's no stranger to international competition.

He raced in the 2013 International Surf Rescue Challenge in Japan and was part of the Junior Black Fins team for the 2014 Lifesaving World Championships in France.

Ben says he's honoured to race for New Zealand and follow in the footsteps of his sporting idols, who set the goal to show the rest of the world that Kiwis won't settle for second.

"I'm now given the responsibility to step up to the mark and help this culture continue. After watching last year's international challenge and seeing how much heart and soul guys like Max Beattie put in for the black cap, really gets you excited to try replicate. It's a huge honour and I'm looking forward to the challenge."

Ben's spent more time in the high performance environment, he has learnt to focus on the process, rather than the result.