Bay Dominate in Coast to Coast 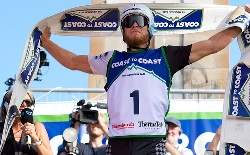 Whakatane's Sam Clark backed up his pre-race confidence to run away from the field and claim his first Coast to Coast men's title.

Clark, who was second behind four-time champion Braden Currie last year, was the man to beat heading into Saturday's 234km race, which stretches from Kumara Beach on the West Coast to New Brighton Beach in Christchurch.

Clark was joined by 15 leaders after the opening 55km cycle leg but soon made his move.

He was quick to put the hammer down to blast over Goat Pass in under three hours during the 33km mountain run, and began the short cycle and 67km kayak leg with a 23-minute lead.

Clark was a convincing winner in 11 hours 37 minutes, more than 50 minutes ahead of Bob McLachlan, 42, who was tackling the event for the first time in 25 years.

"I couldn't be happier," Clark said. "It really is a great feeling. Only those that know me well can actually appreciate just how long and how much I wanted this.

It's quite overwhelming to finally tick that box and finally call myself a Coast to Coast champion."

With past master Currie not racing as he focuses on qualifying for this year's Rio Olympics in triathlon, Clark was the race favourite - something he embraced in the lead-up, making it clear he planned on seizing the lead and being the man to beat.

Hunt, racing in his first Coast to Coast, held on for third, four minutes behind McLachlan.

Nelson's Elina Ussher won her third women's longest day title in 13h 32m after catching Myriam Guillot-Boisset (France) in the second half of the race.

"It wasn't a very easy day for me but I'm very happy to win," Ussher said. "I really felt quite bad after the run but I knew I just had to race my own race and keep it going."

Guillot-Boisset held a four-and-a-half-minute lead after the mountain run but Ussher caught her an hour into the kayak to win by six minutes.

Hayden Wilde, 18, made it a Whakatane double, holding on to his overnight lead in the two-day men's individual event to win in 12h 18m, ahead of Gerard Morrison and Peter Olds.

Anna Barrett from Mt Maunganui also retained her overnight lead from the first day in the women's two-day individual event to hold off Isla Smith and Natalie Jakobs, winning in 13h 45m.