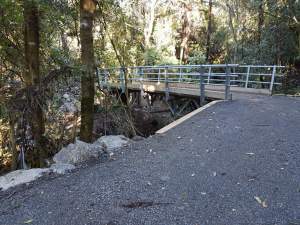 A new bridge completing the Waihi Beach dam circuit will be officially opened this week.

Waihi Beach Cycle Trails Community Trust and Western Bay of Plenty District Council have been working together to redevelop the former water supply reserve into walking and cycle trails in Waihi Beach.

The bridge opening completes the dam circuit project. Smaller finishing touches such as signage and seating will be finished in coming months.

The walkway bridge opening will be celebrated with a ribbon cutting ceremony on Friday at 8.30am.

"We first opened the dam trails as a sneak peek at the end of last year when the Trig Lookout was opened and the feedback we've had has been great."

Waihi Beach Community Board chairman Allan Sole said the Trig Lookout had one of the best views in the Western Bay.

"The views over the coastline, Kaimai Ranges and across the Tauranga Harbour are spectacular. Judging by the number of locals and visitors alike using the trail over summer, it's going to keep growing in popularity."

In the short term, other cycleway projects the Waihi Beach Community Board and the council were focusing on included completing connections within Waihi Beach through to Bowentown and developing a link to Athenree.

Long term, the council was seeking to develop a cycle trail that connected Waihi Beach to Katikati and Omokoroa as part of the national cycle trail linking Auckland to Tauranga.

There are also ambitions to eventually connect the Hauraki Rail Trail to Waihi Beach.

"As we've seen already to date with the Waihi Dam Circuit Trail is that building a trail not only provides locals with an amazing recreational space but also provides an economic benefit by bringing people to the area."

The new bridge and trail upgrade have been constructed at a cost of $60,000 with the majority - $55,000 - from fund raising by the Waihi Beach Cycle Trails Community Trust.

Funding was successfully secured from the Lion Foundation and Lillian Valda Trust.

Western Bay of Plenty District Council invested $170,000 in the project which includes the Trig Lookout trail.