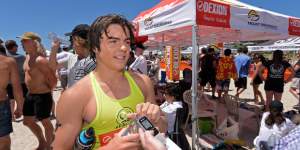 There is nothing quite like the Mount Monster in surf lifesaving Ironmen events.

It is a four-legged brute made up of a 5km beach run, 1.5km swim, 12km surf paddle to Omanu and back, finished off with a gut-busting 6km board paddle and sprint to the finish line through the hot sand.

But its crowning glory is the thrilling leap off the blowhole end of Moturiki Island.

There have been plenty of epic battles in the Mount Monster since its inception in 2013 but Saturday's spectacular was the most competitive yet in the men's elite Open division.

Turning for home around the final buoy there were five still in with a sniff of the title in Luke Cuff and James Lacy from Mermaid Beach, Australia, 2013 champion Cory Taylor from Midway, Wainui's Oliver Puddick and Mount Maunganui clubbie Hamish Miller.

The superior experience and match-hardened credentials of the Aussies prevailed in the end with Cuff winning in a record time of 2h 16m 33s by nine seconds ahead of Lacy, who pipped Taylor on the line, with Miller fourth.

Taylor was well in control after the run and swim, as he took a 44 second lead into the open water paddle to Omanu, but the Australians caught him on the homeward leg back to the Mount Main Beach.

Cuff was not used to starting an endurance race with a 5k beach sprint but hung on when Taylor made his early break.

"I came here to get a half-decent result and some fitness under my belt leading into the Nutra-Grain Series so I am stoked," he said.

"That was one of the hardest long distance races I've done for sure. It was the elements we were racing in and the boys we were racing against. It was dead flat and hot outside but cold inside the water and it really stung me in the swim.