Are our children being selected for stardom too young? 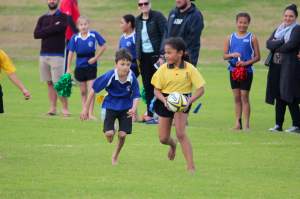 Leading sporting bodies including New Zealand Rugby and Netball New Zealand say children under the age of 13 are too young to be playing representative sport.

Sport New Zealand (SNZ) are warning parents to "let kids be kids" and insists selecting kids at an early level for personal gain with the aim of winning is not the way to success.

SNZ have finished a two-year research programme that found exposing children to representative sport too early can have a detrimental effect and can lead to burn-out, over-use injuries and declining motivation.

Leading the research is Sport NZ's talent consultant Alex Chiet, who said sporting codes should be focussing on keeping kids participating in their games.

"We need to nurture these kids at an early stage and to specialise when they are happy and at the right time of their sporting career. This isn't often at 12-years-old and at the detriment of every other kid."

He said the "odd bolter" from a young age who goes on to win gold or make the All Blacks, they were the minority.

Chiet said the focus should be on the holistic person and not just the athlete.

​He pointed out that New Zealand and Australia had of late seen more of what had always existed, with the pressures of professionalism in sport resulting in depression, substance use and, at its, worst suicide.

"There's some ugly things out there."​

New Zealand Rugby's head of community rugby Brett Anderson said while it is up to the provincial unions to decide how to run their representative rugby regimes, the school of thought was children under 13 were too young to be playing rep rugby.

Anderson said it was NZR's view to have more kids playing the game and casting the net wider at the younger age groups to create more development opportunities.

"We've researched the players and these kids actually want to play rugby that is enjoyable and there is meaningful competition. They don't want to go into a match knowing they don't have a chance and your going to lose by 80 points."

Anderson said representative coming later does not compromise competition. "Winning is part of it, it will be competitive out there and that's all part of it."

Netball Mainland and Auckland Netball have no representative netball at under 13 and instead have more inclusive netball academies .

Their approach has been commended by Netball New Zealand (NNZ).

NNZ chief executive Jennie Wylie said netball aimed to encourage children to play the game rather than pressuring them to perform at a young age.

"We cannot predict who will become a Silver Fern at the age of 11 or 12, because children and young adults develop at different rates both physically and mentally."

The New Zealand Rugby League (NZRL) has had a similar policy to netball for five years.

Jacob Cameron, NZRL general manager (community), said it encouraged "no representative trials for grades under 12, no competition points, no tables and no grand finals".

Most districts follow the national policy with the Canterbury Rugby League an exception, although CRL chief executive Shane Collins said a series of meetings will be held with clubs this year with a view to implementing it in 2018.

New Zealand Football encourages the development of fundamentals for four to eight year olds, "playful" technical training for seven to eight year-olds and skill acquisition for nine to 12 year olds.

Where games are held no points tables are published for grades below 13 years.

In the South Island, age-group representative tournaments start at 11 years old, but have a "participation" focus in the younger grades, a Mainland Football spokesman said.

New Zealand Hockey go against the grain with the early selection process with the national Hatch Cup tournament for boys and Collier Trophy for girls beginning at the under-13 age group.

This has proved successful in the past as many of the men and womens Black Sticks squad are selected at an early age.