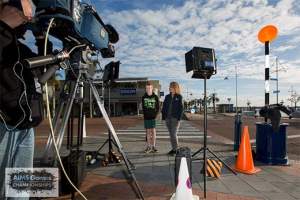 New Zealand's biggest sporting tournament now has its very own TV channel, with the launch of AIMS TV for the 13th-annual NZCT AIMS Games in Tauranga.

The intermediate-aged tournament, which will feature 9300 athletes from 271 schools competing in 21 sporting codes, will have a range of live-streamed events running through the week of September.

A daily highlights package will also screen, with organisers beefing up bandwidth this year in preparation.

“After launching live-streaming last year, having a dedicated TV channel seemed the logical next step and this will let us showcase more of the amazing competitors, supporters and officials involved in our tournament,” says tournament director Vicki Semple.

“The interest in the tournament was extraordinary last year – at one stage, we thought we'd broken the internet – and our tournament website had more than 3 million hits. We're grateful to NZME for supporting our live-streaming this year and can't wait to show the world what the NZCT AIMS Games is all about.”

The scale of the tournament continues to astound organisers, with the 9300 entries a huge jump from last year's record-breaking 8011 entries.

There is even an international flavour to competition this year, with two schools from the Cook Islands (Nukutere and Apii Avarua) and Liahona High School in Tonga sending a total of 12 badminton players, with help from Badminton Oceania.