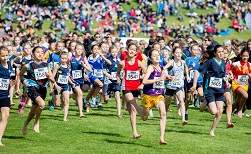 The NZCT AIMS Games has gone on another record-breaking rampage, with nearly 9300 intermediate-aged athletes signing up to take part in the tournament in Tauranga in September.

It's not so much a sharp increase, as a small explosion - while last year's record of 8011 athletes was impressive, tournament director Vicki Semple was staggered by the response from 265 schools when entries closed last night.

"We thought our entry numbers might start to plateau a little after last year but obviously we still haven't touched the sides," Semple said. "The response this year has been nothing short of extraordinary.  While we have three new sports this year, the most impressive part is that the numbers in every other sport have also increased, some dramatically."

There is even an international flavour to competition this year, with two schools from the Cook Islands (Nukutere and Apii Avarua) and Liahona High School in Tonga sending a total of 12 badminton players, with help from Badminton Oceania.

BMX, canoe slalom and Futsal are the three new sports introduced this year; the latter, a modified version of football with five players on an indoor pitch, has attracted 276 players in its first year, while BMX (89) and canoe slalom (31) have also made healthy starts.

The big numbers are in netball, 11-aside football and hockey, however, with 1344 netballers from 112 teams making it one of New Zealand's largest netball tournaments at any level.

Football players have also cracked through the 1000-barrier, with 1232 players from 88 teams, while between the 11-aside and 6-aside divisions, hockey has 1040 players.  Rugby sevens (840), basketball (888) and cross country (772) are the next biggest sports, while 648 students have signed on to compete in the Performance Group challenges.

The 2016 AIMS Games will run from September 4-9 at a range of venues across the Western Bay of Plenty.  The premier sporting event for 11, 12 and 13 year olds is a strategic partnership between Sport Bay of Plenty, Tauranga City Council and the four Bay of Plenty intermediate schools.

An economic benefit study in 2014 found the tournament generated 37,500 visitor nights and contributed $1.96 million to the local economy, while it was also recognised for event excellence at the annual Sport New Zealand Sport and Recreation Awards in Auckland last year.

The tournament is also building up an impressive alumni - the likes of junior All White Alex Rufer was a star in Palmerston North Normal Intermediate's title-winning AIMS Games squad in 2009, while world champion double sculls rower Zoe Stevenson played hockey for Tauranga Intermediate in 2004.