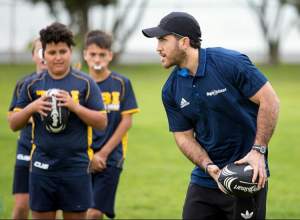 All Black Nehe Milner-Skudder launched the build-up to this year's Anchor AIMS Games, as well as his own comeback, with a training session in Wellington recently.

The World Cup-winning wing and Hurricanes star took a training session with the Titahi Bay Intermediate girls' and boys' sevens teams, who are among 10,000 young athletes from around New Zealand preparing for the AIMS tournament in Tauranga in September.

Milner-Skudder took the two squads through a series of warm-up and technique drills, designed by ACC SportSmart along with New Zealand's major sporting codes, to minimise the risk of serious leg injuries, and later talked to them about recognising and reporting the signs of concussion.

They're important themes for young athletes to get the most out of their tournament experience, says Milner-Skudder.

“The goal was to up-skill them and educate them around how important it is to warm up and get your body right, before heading off to the AIMS Games in September.

“Hopefully they took something out of [the session] and can work on that over the coming months and rip into the tournament.”

They were also important themes for Milner-Skudder personally as he's coming back from a broken foot with hopes of playing against the British and Irish Lions in June.

After moving freely with his young charges, holding tackle bags and demonstrating correct technique, Milner-Skudder revealed he'd resumed running on a treadmill on and was targeting early June for a potential on-field comeback.

“I'm hoping just to get back out on the field with the Canes – the boys head off to Africa in three or four weeks, then they're back against the Chiefs at home before the break. I could try to pencil that in as a bit of a goal.”

This year's AIMS Games is expected to set yet more records, after 9300 athletes from 275 schools competed in 21 sporting codes over the week-long tournament in 2016.

Nearly 100 schools have already registered this year, still six weeks away from entries closing, and tournament director Vicki Semple said things were going up another level this time around.

“Thanks to Anchor and ACC SportSmart, we'll be traveling around New Zealand over coming months to profile some of the athletes heading to Tauranga in September, telling their stories and helping them best prepare for their week.

“We're delighted Nehe was able to help us launch that and add some additional inspiration for the Titahi Bay athletes.”

The 2017 AIMS Games will be the 14th edition of the annual tournament which started in 2004 – a fact which irks Milner-Skudder slightly, as the 26-year-old missed attending the games with his Palmerston North Intermediate Normal School by only two years.

“When you get to secondary school, you have various national tournaments but the AIMS Games is now the big one for intermediate schools.

“I must've just missed that boat when it first kicked off but just seeing how excited the kids were, opening up the bags with all their training gear and seeing their faces light up, tells me how much I would've loved it.”

All AIMS Games coaches throughout New Zealand will be offered a free ACC SportSmart Warm Up workshop, available in June and July. Registrations for the workshops are now open here.