AIMS Games: All About Having Fun 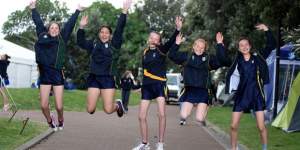 It has been a mixed bag for the Aquinas College's netball team at the AIMS Games but they are proving having fun is the most important thing.

Despite playing an exhausting eight games in only three days, multiple twisted ankles, netballs to the face and being placed in the C grade the girls were still having a ball.

On the first day of play her teammates suffered multiple hurt ankles and she herself was hit in the face with a netball.

The team had won three of the last seven games they had played yesterday.

"But it doesn't matter, we just want to have a good time. Winning is a bonus."

A selfie with Sam Wallace from Breakfast, getting time off school and meeting local Olympians were highlights for Whetumarama.

Molly Barriball, 12, said the games had been a real "whirlwind".

This year the Aquinas College netball team was up against 112 teams.