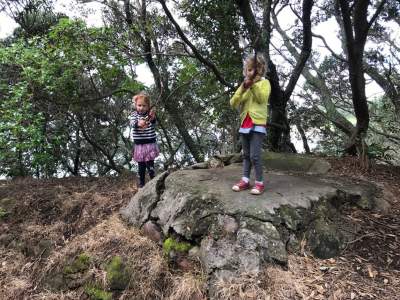 I love Facebook. As a parent, it’s my way of finding out where my four-year-old Daisy and I can go to be outdoors each week.

We came across ‘Outdoor Explorers’ on Facebook and have since been to new locations such as parks/reserves and beaches. Places include mud, water, sticks and trees, with lots of exploring – all the elements a four-year-old could ever want once let loose in the outdoors.

Daisy can still wear her fairy dress, but gets to use sticks as make-believe swords, climb rock faces and make huts at the same time! It’s about being connected to nature and discovering new things.

Along the way, I had to remind myself to stop saying, “Be careful” all the time as she explored new places, heights and objects, and instead ask “What is your next move?” or “What’s your plan with that big stick?”

We need to give our girls opportunities to climb trees, skateboard when they are four and encourage risky play to allow them to build confidence. Being outside allows them to do this and parents need to role model the same.

So next time your girl is on a skateboard at the top of steep hill saying, “I can’t do this Mum”, help her to assess the situation to make her own decisions rather than cautioning her not to go down there.

Here are some ideas of where you can take your gutsy girls for their next active adventures – we may just see you there!