ActiveVoice: Awards night more than the glitz and glamour 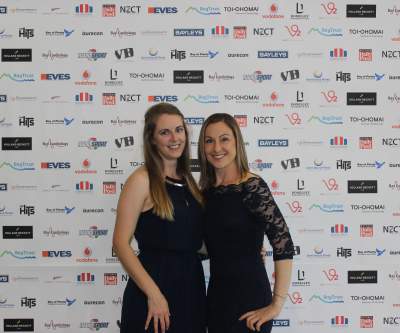 Not counting my high school graduation, I’ve only ever been to one awards ceremony – and it can only be described as a three-ring circus.

Media, VIPs, supporters, finalists, performers and organisers packed out the arena formerly known as Vector in Auckland. Each group was wearing different coloured lanyards and being ushered in all directions. There were people screaming, cameras flashing, raised voices from security and the smell of chaos in the air – and this was only the red carpet welcome.

So when joining Sport Bay of Plenty meant helping organise the Bay of Plenty Sports Awards, needless to say there was an element of hesitation given my one and only past experience.

Compared to others in our organisation, my role was relatively simple: Create the night’s presentation, help set up on the day, take photos and video of the event, co-ordinate media and update on social media.

It was a big day as we prepped for the 400-plus guests we were expecting to fill Rotorua’s Energy Events Centre Bay Forum, but with two hours to spare before show time after set-up there was an element of relaxation from the onset, which continued throughout the night.
But make no mistake, relaxed we may have felt but this was a well-oiled machine.

Despite being a regional celebration of the sports sector, these awards are a prestigious ceremony – one that has been held annually since 1969.

Our MC, The Crowd Goes Wild’s Chris Key, brought an element of humour to proceedings – as did a number of our winners – while our category sponsors were insightful and inspiring about the current state and future of sports in the region.

Some of our country’s best talent, such as Peter Burling and Lisa Carrington, took the top honours and you can’t help but feel a tinge of regional pride – particularly for these two, who were both originally Bay of Plenty Sports Award winners in high school and are now both incredible athletes.

But, for me, it was the secondary school students, the junior athletes and the volunteers who really brought ‘the feels’.

When their name was announced, they walked up the red carpet to the stage in front of their peers, fellow finalists and their dedicated supporters, and they looked thrilled to be there.

This is their moment in which they are honoured for the hard work, blood, sweat and literal tears they have poured into their chosen sporting code. It‘s their passion and humility which I believe really make the night.

Far away from the chaos of my first awards experience, the Bay of Plenty Sports Awards were truly about rewarding our local champions and our community – it takes a village to raise a child (or, in this case, an award-winning athlete).

Congratulations to everyone who helped make this event a huge success, and to all our award winners, finalists, sponsors and supporters. I look forward to being part of the award’s big 5-0 in 2018.