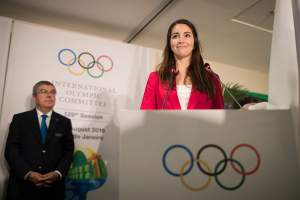 It’s been a great two weeks watching so many amazing New Zealand athletes represent our country with such passion and dedication in Rio.

It’s been a hugely successful event for our Bay of Plenty athletes – who by my count are responsible for 50% of the medal tally - that’s 9 out of the 18 medals in total! That’s along with many top ten finishes as well. #BayProud.

The Olympics are always full of drama and excitement and the coverage this year has been exceptional. It’s been so easy to wake up to the morning highlights of the events during the night before and picking out the events of interest to watch in our own time. I’ve been particularly impressed with the ANZ Olympics App – prompt updates and such depth of content as well.

Yesterday’s announcement in particular struck a chord with me with the news that Kawerau’s Sarah Walker, lifetime member of the Rotorua BMX Club, has been appointed to the IOC Athletes Commission. Nothing like a 2am phone call to get on a plane to Rio to become one of five new members on the commission. After injury plagued Sarah who was unable to qualify for Rio, this is great news for one of New Zealand’s nicest sportspeople, who has always given back to her sporting and local communities.

The Paralympics start on the 8th of September and again we will be treated to a range of sporting events with 29 athletes from New Zealand attending. No Bay of Plenty athletes in this team but I will happily revert back to being #NZProud.

So what does this mean after the games are over? It’s our turn to celebrate this amazing sporting talent as well as many, many more successful sporting achievements over the past year with the 2016 Bay of Plenty Sport Awards. The athlete nomination phase begins from September 5th to October 5th, with all nominations to come via the regional sporting organisations or schools, for the panel of judges to deliberate over and make the tough calls.

Sport Bay of Plenty is looking for new judges to join the panel, with a rotational policy in place. If your experience and knowledge of the sporting sector would add value to the judging panel and you are keen to be a part of a special event in the Bay of Plenty sporting world, please complete the application form available on our website www.sportbop.co.nz/bopsportsawards.