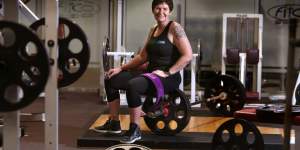 "I think that's pretty amazing for someone who turned 56 the day before," she said.

Newman only began competing this year, and qualified for the world championships by winning the national title for her age group in Auckland after taking the Auckland and Waikato regional titles in April and May.

''I won the Waikato regionals and increased my lift by 10kg which is significant in power lifting - some people take a year to increase by five.''

"I started power lifting two years and 11 months ago and the reason I started was because I was terribly overweight.