A huge week of Athletics in the Bay! 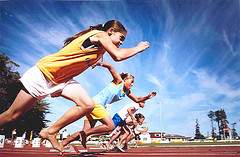 At 9am tomorrow morning (Tuesday 5th March) the Bay of Plenty Athletics will be in full action at the Tauranga Domain. 18 schools from the Western and Eastern Bay of Plenty will be competing in a wide variety of field and track events. The Mid Island athletics day will be held later in the week on Thursday 7th of March at Lakes High in Rotorua, covering 18 schools from the mid-north island, from Taupo, across to South Waikato and Rotorua. Together the two events bring together over 1400 year 9-13 athletes. As a part of the day there are a number of athletes with disabilities who compete in the following events – shot put, discus, 100m, 200m and 400m as well.  Tournament Director Julie Adamson loves the atmosphere and the competitiveness of the day “We all look forward to the 100m & 200m finals as well as the relays – the schools really get behind their athletes and it’s a lot of fun – and noisy!.”

Results will be available from http://www.sportbop.co.nz/event_results the following day - along with a selection of photos.