A family passion for canoe slalom 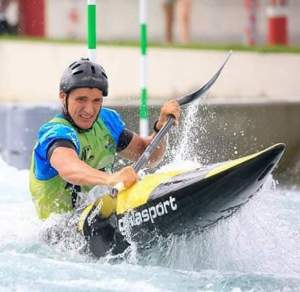 Damian Torwick developed his passion for the sport of canoe slalom by initially following his older brother Cody’s footprints.

“Cody started kayaking before me,” says Damian. “He’s not the most athletic lad and he started it because you could sit down doing it. I didn’t really want to try it; maybe do rowing instead. But you have to get up early for rowing so I thought I’d give kayaking a go.

“After just one time in the kayak I thought ‘I love this!’ and so I just continued with it. That was about four and a half years ago and I’ve never looked back. It’s the only sport I do now.”

Damian is currently in his last year at Tauranga Boys’ College.

“The college encourage us all to do a sport. My brother joined kayaking but stopped during his last year of school to focus on uni.”

Damian’s had a good year so far, competing in late March in the three-day New Zealand Secondary Schools Canoe Slalom Championships at the Hawea Whitewater Park where he won top overall paddler. He then travelled on to Tekapo for the national selection races over Easter weekend.

“At the nationals I made it through to the finals, which is the top 10 paddlers, but then I missed a gate which means you have a 50-second penalty so I ended up coming second in the under 18s. It’s been a good year so far and I’m happy where I’m at with the paddling.

“At the secondary schools competition, there’s different events. In the K1 you sit on your butt and paddle with two blades. In the C1 you kneel in the boat with one blade. I’m more of a K1 paddler.”

Goals ahead for Damian include the yearly world cup and world champ events, and the Olympics.

“They just took C2 out of the Olympics which is the one with two people in a boat. The whole kayak community’s in a bit of an uproar about that.

“This is my last year in the under 18s or juniors. Next year I move up into the under 23 category. After 23 you move to the senior category and compete at world cups and champs and Olympics.”

This year Damian has been selected to compete with the New Zealand team in Italy, and faces the financial challenge not only around his chosen sport and an expensive year competing; but also his day-to-day family living situation.

“Our family is not in the best financial situation at the moment,” says Damian. “We’re going to be looking at living in a caravan soon. We’ll get two caravans so my parents will have one. And my brother and I will be in the other.”

His mum Melanie works teaching special needs children at Tauranga’s Special School and his dad Paul is an automotive engineer.

“We’ve been renting a home in Tauriko for about 12 years, but there’s going to be a road go through where we are living, so we have to move out of the house,” explains Damian.

“We got denied our mortgage by the bank. So we thought ‘alright, we can’t go and buy our own home so we can either go rent and not save up any more money for a mortgage because of the insane rent prices. Or if we live in a caravan, hopefully in a few years we’ll be able to afford our own home’.

“For this year’s trip to Europe I was umming and ahhing about going because of our financial situation,” says Damian. “I’m scouting for sponsorship to make the trip possible.”

Damian has been fortunate in that he is one of nearly 30 Bay of Plenty sports people, from a variety of different sporting codes, who are the recipients of the first round of BayTrust Athlete, Coach and Official scholarships for 2018.

Along with five or six other canoe slalom athletes, he has gym sessions at the Sport BOP gym three times a week with French coach Pierre Labarelle, one of the BayTrust Coachforce staff.

“He’s such an amazing coach,” says Damian. “He came along about 18 months ago and he’s worked wonders with all the athletes. Mostly I work on my upper body. You look like an upside-down triangle.”

Damian is trying to figure out what comes next after college, where he is the college’s academic captain as well as an established sportsman.

“It’s an honour,” says Damian. “But it does give me some pressure to do something that reflects that.”

Feeling pulled in two directions, he has decided to centre himself in Auckland next year.

“There’s a whitewater course up there at the Vector Wero Whitewater Park,” says Damian. “We get to train on a world class course. I’ll probably study up there but don’t know what subject yet. Something that will help me to do the sport I’m really passionate about.”