In 2017 Kelly Hudson, the Officiating Development Officer at Tauranga Hockey Association, was the winner of the Official of the Year award at the Bay of Plenty Sports Awards.

Receiving her international badge in 2005, Kelly is currently in the top panel of international umpires worldwide. With two Olympic Games, a World Cup and three Champions Trophies as well as World League competitions under her belt, Kelly has worked at the highest level and has a great understanding of officiating. 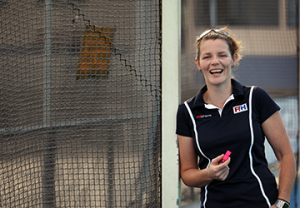 Kelly has also contributed as Umpire Manager at numerous National Age Group Tournaments over the past 10 years, and is recognised as one of the premier umpire coaches in New Zealand.

"Kelly's officiating experience made her a stand out for the 2017 Official of the Year award," says Sport Bay of Plenty's Sport Manager Nick Chambers.

"Officials at all levels play a such vital role in sport, and it's an honour to be able to recognise the contributions of such people at the Bay of Plenty Sport Awards."