Coaching great Gordon Tietjens has twice been honoured with a Supreme Award at the Bay of Plenty Sports Awards.

Tietjens was born in Rotorua, and started as a fullback and first-five at Rotorua Boys' High School, but later became a loose forward in college.

He played as a loose forward in 78 matches for Bay of Plenty from 1977 to 1988, and made his debut against King Country in Te Kuiti. Tietjens spent a season at Waikato in ’83, and returned to the Bay of Plenty again in 1984 to’86. 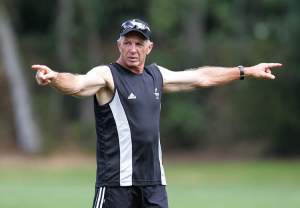 Tietjens started coaching sevens in the early 1990s, and coached the Bay of Plenty side to the win in the Melrose Sevens. In 1994 he went to coach the New Zealand Sevens team.

He went on to have an illustrious coaching career, and was inducted into the IRB Hall of Fame in 2012. Tietjens has coached the All Black Sevens to 12 IRB Sevens World Series titles, Rugby World Cup Sevens crown in 2001 and 2013, and four Commonwealth Games gold medals.

He has also coached many young players who have gone on to be All Blacks: Jonah Lomu, Cory Jane, Ben Smith, Rieko Ioane and Israel Dagg.

Gordon Tietjens won the Supreme Award at the Bay of Plenty Sports Awards in 1998 and 2011.

Tickets for the 2018 Bay of Plenty Sports Awards are now on sale.