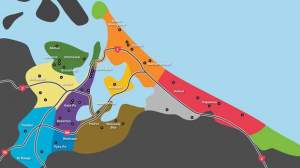 Three areas of Tauranga will be the big winners from a plan to spend $24 million over the next 10 years improving the city's network of cycleways.

The council's Tauranga Cycle Plan has split the city into 10 areas, with most of the $12m earmarked to be spent over the next three years targeting the area covering Mount Maunganui to Arataki.

Tauranga's cycle plan was unveiled yesterday at the council's transport committee, with the two other priorities for the next 10 years spanning the CBD to Greerton and the Bellevue/Matua/Otumoetai area.

The plan aimed to encourage more people onto bikes and reduce the numbers driving to work and school.

Interviewed afterwards, he said the amount to be spent on consultation and construction would be a significant boost to the local economy.

"We think spending on cycleways was a really good thing because ultimately you get a lot more bang for your buck than building more roads."

He said building a two-way cycleway was a fifth to a tenth of the price per kilometre than a council road, and finding places near schools to roll them out was the best way to get value for money.

Crowther said it would be good if the money was recirculated in the region, rather than the contracts being let to companies outside the Bay. Ideally, the procurement process should if possible benefit local people and local workers at all stages of design and construction.

He said if the council did not get people out of their cars soon, it would miss out on excellent opportunities being offered by the new Government whose focus was to invest in public transport and multi-modal transportation systems.

"All the ducks are lined up."

Improving Tauranga's transportation infrastructure was the No 1 issue facing the city, and if the city did not get onto the solutions quickly things would get even worse, he warned.

The surprise for him in the plan was how a big chunk of the money for the first few years was going to the Mount area.

"The issue is that whatever the amount, should it really be going for the first six years primarily to the Mount - or should it be spread around."

The council's rationale was to link up as many cycleways as possible in each area, before moving on to another.

"But seven of the 10 areas would not get anything much for 10 years," he said.

Cycleways connecting the Mount, Omanu and Arataki have been prioritised for investigation, design and construction for the next three years, with construction spilling over into the following three years starting 2021.

The investigation and design phase for the CBD to Greerton cycleways was proposed to take place over a similar timeframe, but construction would not begin until the three years commencing 2021 and finish in 2027-30.

The cycleways for Bethlehem and Judea, and the Welcome Bay/Ohauiti/Maungatapu area would be built during the six years starting 2030. Cycleways construction for Papamoa, Tauriko and Pyes Pa would fall further out in the implementation plan.

Separately funded standalone projects with cycling benefits, proposed to start in the next three years, including upgrading Totara St, the Mount North one-way system and the Marine Parade boardwalk extension.

The $24m proposed to be spent on cycling for the next 10 years goes out for consultation as part of the council's Long Term Plan.