Last Friday night the Tauranga Hockey Association Awards Evening was held at Club Mount Maunganui. The evening was designed to recognise achievements throughout the season and reward the players, supporters, officials, coaches and volunteers that have worked so hard to create such a successful year.

Commonwealth Games gold medallist Amy Robinson and international umpire Kelly Hudson were the guest speakers and in reply to our MC Lavina Good’s questions, gave some insights on what it takes to improve year on year and be a top-level athlete and umpire. 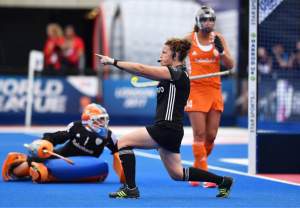 Hockey in Tauranga is getting stronger every year with a greater number of people involved in the game and the quality of players improving. This has been shown in our results locally and nationally.

Taking out the big awards at the end of the night were Bayley’s Otumoetai’s Hugh Gilmer who was named Tauranga Men’s Player of the Year and CMS Mount Maunganui’s Abbie Johnston who was awarded the Tauranga Women’s Player of the Year. Both players have had big seasons for their club teams with both players playing for the combined Tauranga/Bay of Plenty teams at National Seniors Tournament. Abbie has just been named in the NZ Maori team. An International Player of the Year was awarded to a player who has participated in the Black Sticks or Junior Black Sticks over the past 12 months and has had at least a two-year affiliation with the Association during their career. This was awarded to Samantha Carlton who has had a stellar season on the World Stage, including winning a gold medal at the Commonwealth Games. The Junior Player of the Year Awards went to Madeline Fleming (Bethlehem College) and William Gourley (Tauranga Boys’ College) who both had strong seasons for their schools and then went on to represent the Midlands Under 18 teams at National tournament. William’s U18 team won bronze at Nationals. Madeline has just been selected in to the NZ U18 development camp, along with Ruby Evans.

Male and Female Coach of the Year went to Emma Phelps and Lincoln Churchill. Taela Eggers and Hugh Lees took out the Female and Male Umpire of the Year. This year THA re-named their Volunteer of the Year Award to the Bill Webb Volunteer of the Year Award. Bill is a long-standing volunteer for THA and his list of roles and duties over the year is lengthy. Bill received a standing ovation when he came forward to present his award. The Bill Webb Cup’s inaugural recipient was Phil Gillanders for all the work he has put in to various areas of the game throughout the season, including coaching primary, intermediate and U13 development representative teams. He also umpires and is an umpire mentor. One of his biggest contributions is his commitment to Primary School hockey where he spends five hours at the turfs every Saturday during season.

The night also recognised the following milestones that were achieved throughout the season: