Les is an inspiration. He has made massive changes during the time he was on the Green Prescription programme.

He was an active person, however this changed when he moved to a more sedentary job. He also had a leg infection which turned into cellulitis. This condition severely restricted his mobility and resulted in a stay in hospital. 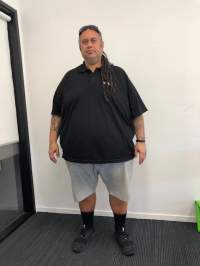 While in hospital, Les made a decision that he had to make changes to his lifestyle. He wanted to be active again, and more importantly, he wanted to spend quality time with his extended family.

Les, aged 44, set about increasing his activity. His goal? To walk up Mauao every day. By September 2018 he had walked up the mountain 136 times.

During this journey he has lost 36 kgs and dropped several trouser sizes. His health has improved, including lowered blood pressure. He made changes to his eating – healthier options, smaller meal sizes, as well as completely cutting out alcohol.

Les tells us that he is not finished with his quest to better health, and has a goal weight to achieve. In the meantime, he has gained the confidence to share his journey with others and is speaking to various groups, including students through to kaumata; he has also been the subject of various newspaper articles.

His parting words were, “It is not a race – take one step at a time”