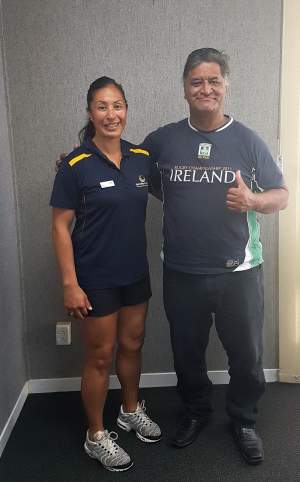 ‘Get them off the marae and off the pie’ – that is Charles’ motto and the inspiration for why he wants to share his journey to better health and wellbeing.

Charles (59) describes his life as spinning out of control. In 2015, he had gone through seven deaths in the span of nine months, including his beloved wife.

“I lost my wife so there was no accountability to focus on what I needed to do. When she passed, I lost all control.”

Grieving and struggling to look after himself, Charles wasn’t eating or sleeping well, and social occasions always revolved around a box (or two) of beer. At his worst, it got to the point where he was on 12 pills a day for his various medical conditions.

That’s when his doctor suggested Green Prescription, a programme designed to dramatically improve his quality of life by adjusting his exercise, eating and sleeping habits. Charles met with Verina, Sport Bay of Plenty’s Green Prescription Advisor, and the rest – as they say – is history.

It started with small changes, such as introducing regular walking and aqua jogging classes into Charles’ routine. He began to take control and found a new love for physical activity, as well as the way it made him feel mentally and physically.

“I never thought I could sweat in a pool!” says Charles with a laugh.

“Previously I could not get up and I didn’t want to get up. Things just weren’t working. Now I can’t sit still for too long before I seize up. Once you realise this way of life if about your health and your future, it makes it easier to take control.”

He’s also changed his diet and as a man who previous wouldn’t touch a vegetable, he’s now frequently incorporating his favourites broccoli and capsicum into meals.

“I’ve had my off days, but you feel it – and that keeps you going. I have even started a herb garden at home!”
Charles is now using his journey to help inspire others, including his own family.

“It’s not always easy, but I tell my daughter, ‘Why are you buying a bucket of chicken from KFC? You know for the same price I got all this good food.’ So I am influencing her and now she does not go out of her way to get the chicken, and we’ll go to the supermarket instead.”

To date, Charles has lost 36kg in 12 months, and has reduced his 12 pills to just one a day. He’s thrilled to be able to be around for his tamariki and mokopuna.

“My granddaughter has written this note beside the mirror and I look at it every day. It says: Three a day keeps the doctor away – S for sleep, E for eating good food and E for exercise and she goes, ‘SEE I told you koro, now I get another day with you’.”

To help keep others focussed on their journey, Charles is part of a regular Coffee Group hosted by the Green Prescription team in Rotorua. Charles encouraged his mates to come along to the coffee morning. He also attends a men’s group, has joined QE Gym, and regularly walks most days.

“The changes you make are a mental thing and it is important to surround yourself with people who feel the same. It’s about finding other geese that flock together and also bring along others into the flock, and then they start realising changes and creating clean habits too.”

“I thank Verina, the Green Prescription team and everyone who has supported me. It’s a choice that she makes to keep in touch and keep me motivated, and it’s those people who keep me going.”